In this bold reexamination of the Harold Washington movement and moment, the election of the first Black mayor of Chicago reveals both the promise of multiracial coalition in the 1980s and the peril of placing too many resources in electoral politics alone. A dynamic coalition did the unthinkable, electing Washington not once, but twice, in one of the most balkanized cities in the United States. His electoral victories not only established the charismatic Black politician as a folk hero, but also underscored the great potential for the era’s progressive, mostly Democratic urban politics when Ronald Reagan and other political conservatives appeared resurgent. Yet what could be called the Washington era revealed clear limits to electoral politics when decoupled from neighborhood-based movement organizing. Drawing on a rich array of archives, oral histories, periodicals, and other sources, the book paints a rich tapestry of Chicago politics, including how white supremacy, deindustrialization, dysfunction, and voters’ own contradictory expectations stubbornly impeded many of the administration’s reforms. Ultimately, Washington’s historic victory and administration proved a cautionary tale about the risks of placing too much weight on electoral victories above other civic action – a lesson activists may want to heed in the 21st century. 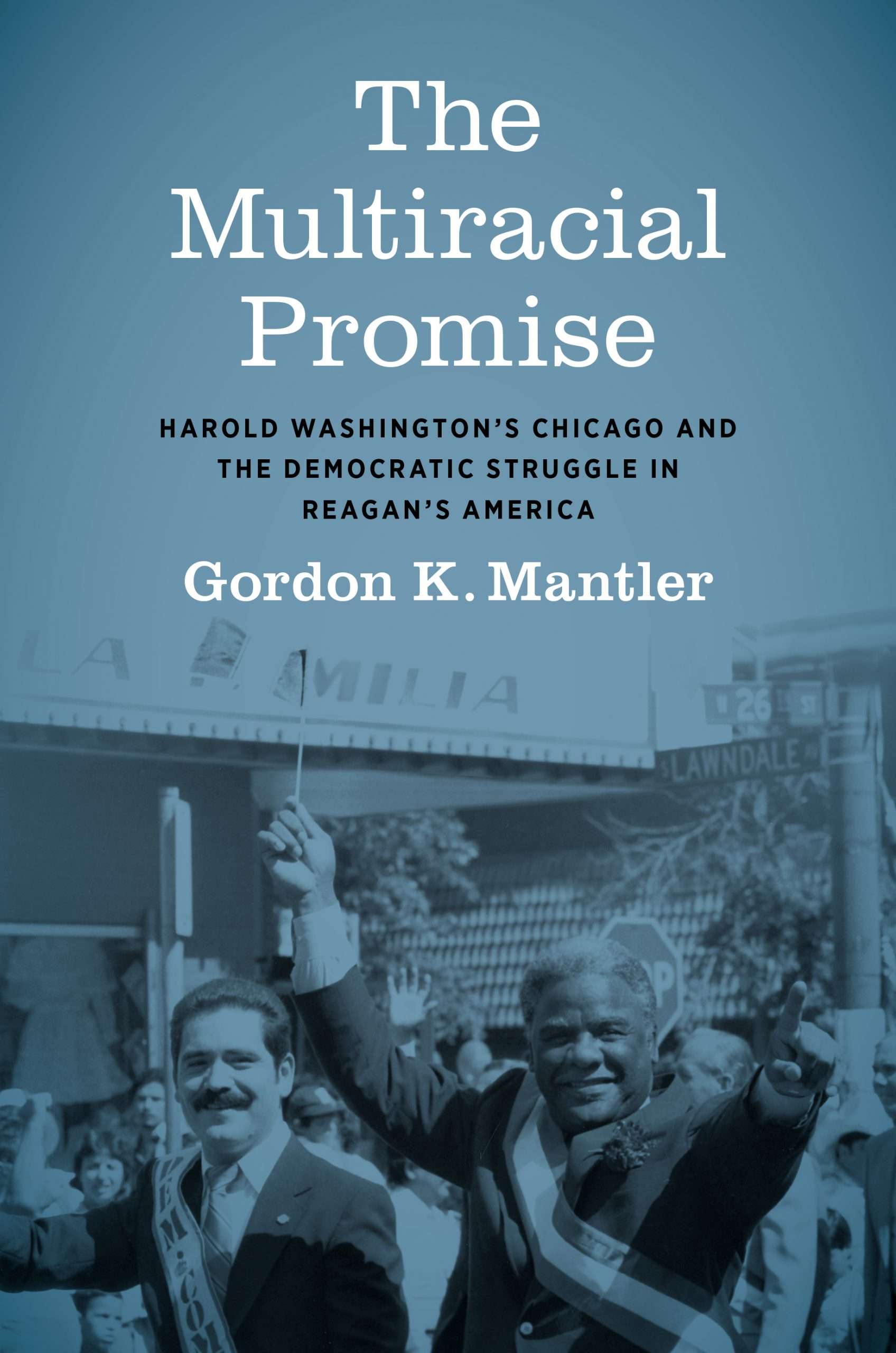 You can also pre-order the book at a local bookstore of your choosing.
Or click on these links to order from some of Dr. Mantler’s favorite bookstores:

One More Page Books in Arlington

“This is the book we’ve needed on Harold Washington and his era of Chicago politics. Mantler takes readers beyond the man and his moment, exploring the nuances of political coalitions, the relationships between grassroots and electoral politics, and the historical and modern challenges of making a more equal Chicago.”

“Exploring the gritty details of Chicago politics, Gordon Mantler shows us that the successful election of the city’s first African American mayor, the late Harold Washington, was achieved not through the mobilization of black voters alone but with the participation and support of Latinos, progressive whites, and the LGBTQ community. In an era crippled by the Daley (Democratic) machine, industrial decline, growing unemployment, and Reagan austerity policies, the interracial coalition Washington cultivated provided the only real hope for challenging economic inequality and expanding democracy. Mantler masterfully outlines the promise and limits of such alliances and reminds us both why they are so critical to a democratic society and meaningful social change but also how they can be used against the masses, to serve only an elite few. “

—Lilia Fernandez, Professor at University of Illinois at Chicago, author of Brown in the Windy City: Mexicans and Puerto Ricans in Postwar Chicago

“The Multiracial Promise takes its place on a short shelf of indispensable books on urban politics in the late twentieth century. Gordon Mantler moves beyond the politics of personality to offer a richly told account of the relationship of electoral politics to social movements, breaking from both romantic views of coalition building across racial lines and cynical accounts of social movement cooptation. Scholars, activists, and politicians can all learn a lot from this critical reflection on the opportunities and limitations of electoral politics in American cities then and now.”

—Thomas J. Sugrue, author of Not Even Past: Barack Obama and the Burden of Race

—Jakobi Williams, author of From the Bullet to the Ballot: The Illinois Chapter of the Black Panther Party and Racial Coalition Politics in Chicago

Power to the Poor: Black-Brown Coalition and the Fight for Economic Justice, 1960-1974

The Poor People’s Campaign of 1968 has long been overshadowed by the assassination of its architect, Dr. Martin Luther King Jr., and the political turmoil of that year. In a major reinterpretation of civil rights and Chicano movement history, I demonstrate how King’s unfinished crusade became the era’s most high-profile attempt at multiracial collaboration and sheds light on the interdependent relationship between racial identity and political coalition among African Americans and Mexican Americans. I argue that while the fight against poverty held great potential for black-brown cooperation, such efforts also exposed the complex dynamics between the nation’s two largest minority groups. Drawing on oral histories, archives, periodicals, and FBI surveillance files, the book paints a rich portrait of the campaign and the larger anti-poverty work from which it emerged, including the labor activism of Cesar Chavez, opposition of Black and Chicano Power to state violence in Chicago and Denver, and advocacy for Mexican American land-grant rights in New Mexico. Ultimately, it challenges readers to rethink the multiracial history of the long civil rights movement and the difficulty of sustaining political coalitions.

“The often-overlooked partnership between Mexican American and African American activists of the 1960s receives much-deserved attention in this important contribution to the history of the civil rights era. . . . Recommended. All academic levels/libraries.”

“Mantler offers an impressive examination of an understudied topic: antipoverty movements. He successfully weaves multiple histories, based on a sometimes staggering array of sources, into a highly readable analysis of social movement organizing.”

“This fascinating and richly researched book offers an important corrective to assumptions that identity politics and multiracial coalitions are necessarily mutually exclusive.”

“Gordon Mantler turns conventional wisdom on its head. . . . An important, innovative addition to the growing literature on racial coalitions during the civil rights era.”

“Well written and significantly researched book that explores instances where identity politics and multiracial coalitions were not mutually exclusive. . . . A highly helpful read for those interested in the historiography of civil rights and identity-based movements, African American organizing, Mexican American activism, poverty, economic justice, and, most importantly, coalition politics.”